Save the Federal Election Commission!

The Federal Election Commission (FEC) is a regulatory agency that keeps records of political campaigns in the United States. The FEC is in charge of enforcing campaign finance law as well as enforcement policy. Many of its decisions are made at the top level by a vote among its six commissioners. each commissioner serves for six years per a term. They are appointed by the President and confirmed by the Senate. The problem is that there are only four commissioners, all of whom where appointed by Bush and continuing their expired terms solely because they haven't been replaced. One of them has now announced his resignation effective August 31st, putting the FEC below the quorum for votes. This will paralyse the FEC, making it incapable of voting on internal financing and policy for the upcoming 2020 elections. Worst of all, the commission cannot recommend prosecution without a vote, meaning that any candidate can get away with gross abuse of campaign finance law. President Donald Trump has so far announced one nominee back in 2017. The Senate committee in charge of matters pertaining to the FEC never scheduled a hearing. Both the President and the Senate, for the sake of continuing democracy, must appoint and confirm new members as soon as possible to prevent a lawless election that will be neither free nor fair. I don't care how old you are or what your politics are, this is a threat to a cornerstone of democracy. Write to your people in your congressional delegation. Write to advocacy groups. Share on social media. We must save the Federal Election Commission!

Ihumātao Peninsula is a beach in Auckland. Part of it is a wāhi tapu, a Māori sacred site. This wāhi tapu includes one of the oldest Māori hillforts and Ōtuataua, a small volcano. The Ōtuataua Stonefields Historic Reserve covers most of the area, protecting it from being developed on. The area outside the reserve was taken from Māori who supported an anti-British movement 150 years ago and given to settlers to farm. Nowadays, the farms no longer exist and Māori are only people who use the land. However, they risk losing their wāhi tapu again, this time to a construction company: Fletcher Building Limited, one of New Zealand's largest companies.

Save Our Unique Landscape, or SOUL, is a Māori-led organisation made up of people living in Ihumātao. They have been peacefully campaigning both at parliament and in Auckland against Fletcher for years. Despite SOUL being peaceful, police have been called down to arrest and evict the protectors of the wāhi tapu on the 23rd, even going as far as pepper spraying dogs. Māori activists from both Auckland and the rest of New Zealand have come together to protect their land and also shut down an intersection in Wellington in protest. They are being joined by allies who recognise the injustice of the situation.

The New Zealand Labour Party, while in opposition, criticised the National Party for allowing Fletcher to buy the land. Now, as the largest party in government, they have abandoned the people of Ihumātao. Jacinda Ardern, Prime Minister of New Zealand and party leader, maintains that there is nothing the government can do to intervene. This is a lie. Fletcher is willing to sell the land back to the government, who can restore it to the Māori people. The government can also seize it by eminent domain and declare it a park or dispute the ownership of the land by the Waitangi Tribunal (although both are much more complex processes than simply buying the land).

The government is now trying to justify its continued lack of action by saying that the local iwi (Māori tribe), Te Kawerau ā Maki, is working with the developers, and therefore this is an issue solely between Māori. Several other Māori groups (both in the government and NGOs) have said they support Te Kawerau ā Maki or have called all non-Māori to stay out of the argument. I don’t understand these positions: If other Māori are dissatisfied with the actions of an iwi, why is the government not an appropriate party to call for arbitration or to petition? Should all Māori live in an unquestioning obedience to their tribal leadership, even when the leadership sells them out? Te Kawerau ā Maki is far from the only iwi with customary ties to Ihumātao. Other iwis in the area have been just ignored by both the company and the government. Arguably, as one of the oldest sites of Māori settlement, it is not just the heritage of local iwis but of the entire nation. None of the parties in New Zealand's parliament have stood up for the people of Ihumātao other than the Green Party (this is not an endorsement of the party, just stating a fact). It has been hard to find a stance on the issue from any non-Green member of parliament other than Ardern. All I could find was that Labour MP Adrian Rurawhe has attended the Wellington demonstration.

Email ThisBlogThis!Share to TwitterShare to FacebookShare to Pinterest
Labels: politics

Here are some photos from the first ever Princeton Pride Parade that took place on June 22, which was also my first time attending Pride. Thanks to the Bayard Rustin Center for Social Justice for organising the event, and to the Princeton YMCA for hosting it. Also thanks to the mayor and the members of the Princeton Borough Council for enthusiastically endorsing and helping make this event happen. 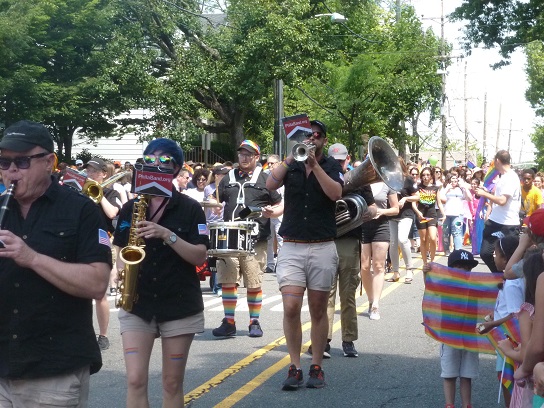 The Philadephia Freedom Band lead the march. Their mission is to provide a safe place where any LGBTQ+ and allied individuals can play music. 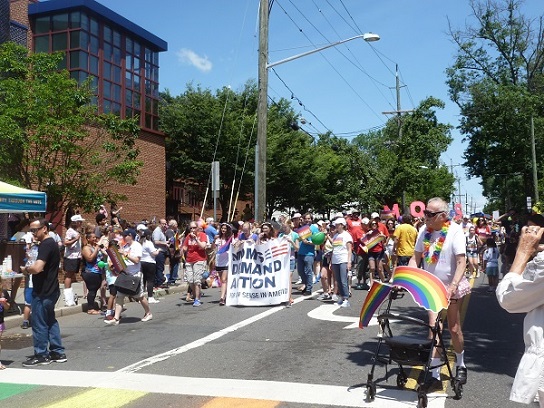 Moms Demand Action for Gun Sense in America is one of the main gun reform advocacy groups in the United States, founded after the Sandy Hook Elementary School shooting. 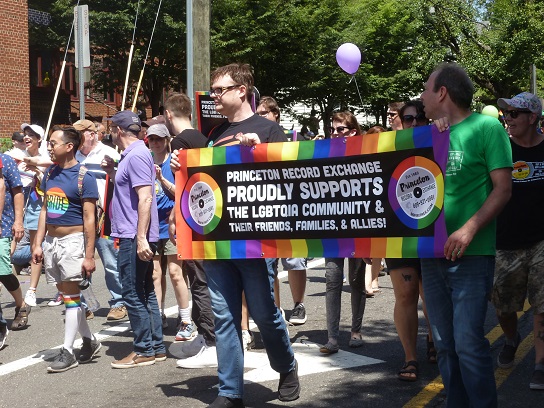 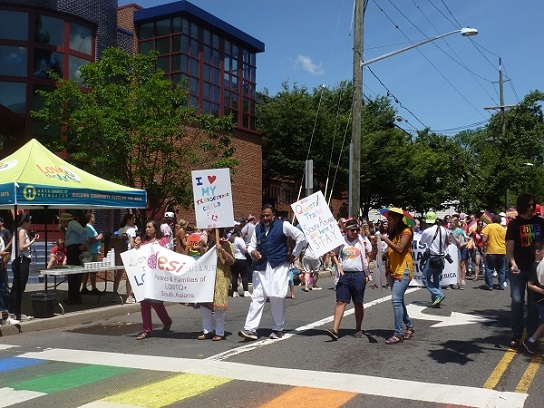 Desi Rainbow Parents & Allies is an organisation for working for LGBTQ+ acceptance founded by South Asian families and friends. 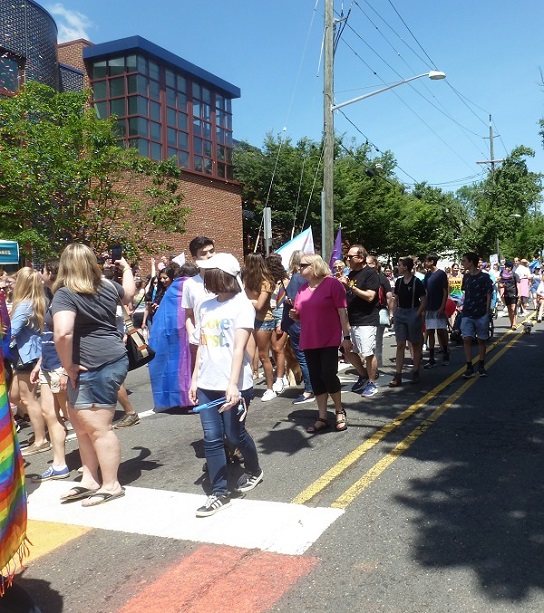 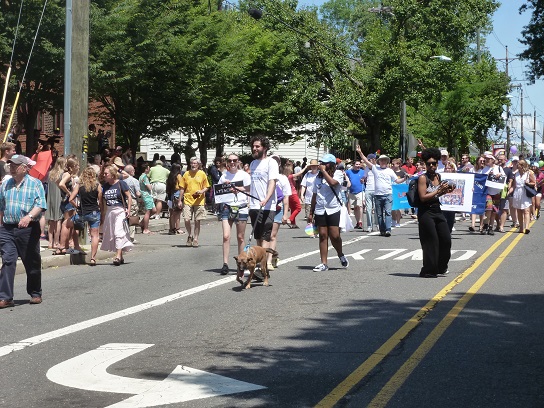 I saw many dogs marching (or resting!) among us. 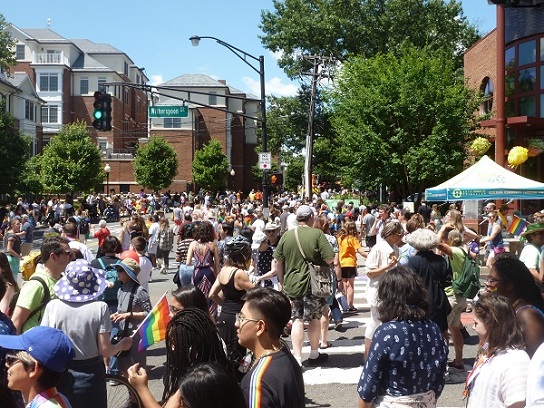 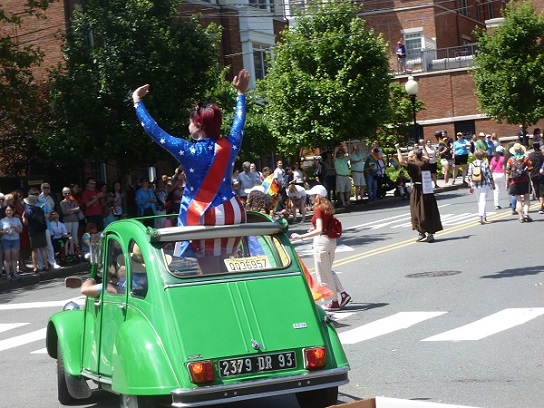 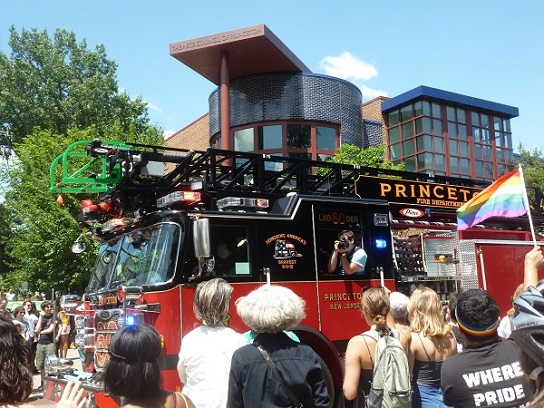 The Princeton Fire Department also showed up for the festivities! 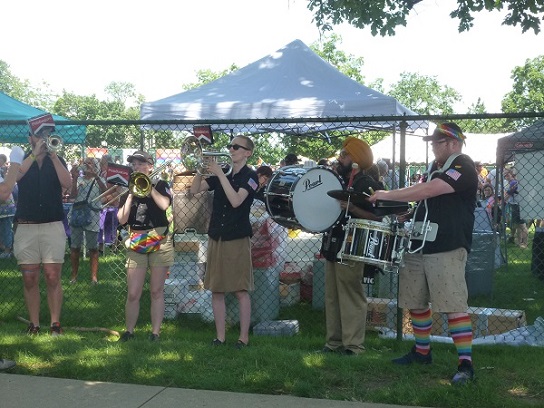 When the actual parade part was over, we headed to the YMCA for inspiring speeches and entertainment. In between, the band played right outside the YMCA. I got to twirl a flag and dance to the beat, but I wasn't good at either.

I have a favour to ask. One of my friends has a nephew who went under a lung transplant a while back. Her sister's insurance was billed $4 million and they are still paying their share of the dues. I posted on twitter a link to their donation page, and they also have a page on Facebook. Please retweet or share the Facebook page and if you have money to spare, donate it.

I have a favour to ask. One of my friends has a nephew who went under a lung transplant a while back. Her sister's insurance was billed...